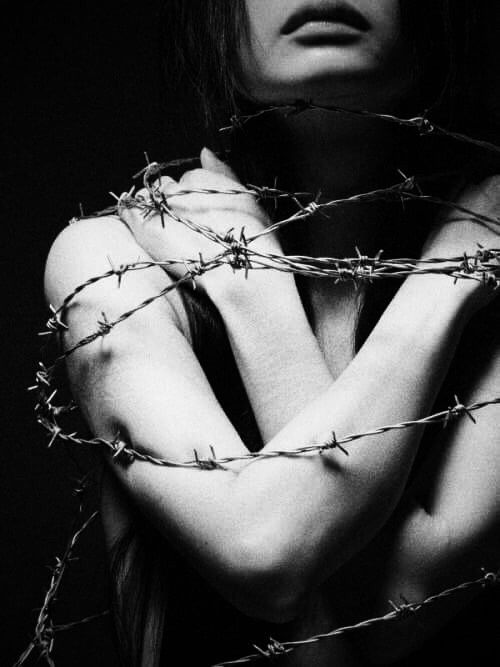 A child’s innocence stolen!  Through no fault of their own, the child is thrust into an environment that is anything conducive to behaviors worth emulating, much less a world that any adult should walk through or be subjected to.  The vantage point being projected through the naive lens of a child is one of sheer horror and gore.

For the precious, innocent child, being left alone to process the effects brought on from rage and abuse in living with addiction, they are victimized and stripped of all protection and innocence.  Their only hope for survival is through denial.  Denial will become their stable reality.  They will learn that the only way to handle fear is through the fight-and-flight response.

The child immediately employs protection from the construction crew of fear.  With no one to offer consolation and a warm embrace, the child’s fear factor instinctively and subconsciously constructs a safe haven.  This safe haven consists of walls and barriers intended to protect the child as they hide and cradle behind all the emotional scars brought on from the lack of parental protection and emotional stability.  Abandonment is a fierce enemy when a child’s heart is unprotected!

The only rocking this child receives is in the drawing up of one’s knees tightly to their chests with their t-shirts pulled over down to their feet as a means for capturing needed warmth and protection.  They rock back and forth in their cocooned state to pacify and console their anxieties caused from living in a violent environment.  Constant crocodile tears flow from the child’s tender face saturating their t-shirt that once offered warmth now leaving the child cold due to the dampness caused from the chill in the air.

Because of the child’s innocence and naivety, these walls they’ve constructed around their tender and bleeding hearts for protection from others do nothing but hinder their reality as to what life is like in the healthy behaviors that exist on the other side of the wall.  Their barriers teach nothing but emotional isolation, though understandable.  This emotional isolation leads to a lack of self-worth riddled with insecurities and identity crises.

As the child attempts to climb up on his own to catch a glimpse of what God says is on the other side of the wall offering freedom, the child is troubled and confused by what they see.  There is peace without chaos and violence.  Their skewed perception developed from fear clouds the warm invitation and the comforts offered through what the safety of the environment promises.

The child hesitates and exhausts themselves emotionally to climb over.  Without a friend or parent’s hand to grab ahold of to help them safely over the wall, the exhaustion sets in from battling the fear of the unknown alone.  This fear contributes to the child slipping, allowing the barbwire on top off the wall to grab ahold of their flesh, causing even greater physical and emotional pain.

The child is forced to reside in the lonely, cold and dark places they’ve created to protect themselves from the dark and violent world they were running from until they scurry up enough strength to attempt their breakthrough again.  Light and warmth arouses their curiosity.  Children may be resilient, but what kind of entanglement will their imprisonment bring until exhaustion sets back in?  Is this how we are leaving future generations instead of equipping them?

The child repeatedly attempts to no prevail.  Each attempt leaves the child numb and desensitized to the pain being caused from each laceration delivered from being held captive in the entanglement of the barbwire.  The child wants rescued.  This child is alone and does not have any guidance how to tackle this bondage victoriously.  No one is walking alongside of them or extending a hand of help.  Everyone just looks the other way.  They want help, but no one is offering.  Why are we a society who gives up too quickly and would rather cast the blame and responsibility onto somebody else?

With no one encouraging the child to try again or in a different way, the child becomes so weak and delirious, bad decisions are made.  The child’s last futile attempt to break free from the entangled mess offers nothing but resolution to just survive instead of thrive in this painful cocoon and environment.  Every future move that child will make will cause great bodily injury, to themselves and/or others.  Where does this cycle of abuse end?

Children do not know how to handle adult problems and should never be a part of or witness, whether abusive or not.  Children need to be protected.  When parents are at war dealing with their own emotional battle scars of abuse and addiction, this only further aids in casting the frightened and innocent child into a scary world all alone due to being wrapped up in the remains and captivity of fear and isolation.  But there is hope!

How does one go from abhor to restore?  Love versus fear!  Faith versus fear!  How does that look when the victim is both the child and adult and owning up to one’s responsibility as a parent in allowing my precious cubs to be subjected to this ugly world in living with addiction and abuse?  Fear kept me in bondage as a victim and yet Love was calling me to freedom.

Faith versus fear, how would you react?  Breaking free is a risk.  Is freedom worth it?  My fear’s captivity and insecurities led me paralyzed, unable to escape the bondage and have self-control with trust and freedom.  How could I teach and equip my children to walk in freedom outside the generational walls of living with addiction and abuse when I was too cowardly to break free myself?

Enjoy listening to the lyrics that speak so loudly and profoundly to this very subject in “I’ll Keep On” by Jeremiah Carlson.